While venturing in CPA marketing field, I quickly realized that photo editors are the best friend of any CPA marketer. The market is already flooded with some of the top quality photo editing software. However, as a Google Chrome fanboy extensions available at Chrome webstore has always piqued my interest. Ever since the invention of camera, photos has become the interwoven part of one’s life. Instagram started a new era of photo editing on the smartphone by bringing tons of filters, frames and small enhancements at user’s fingertips (instagram clients for all). Rest is history. In fact, we covered many android as well as iPhone apps serving the same purpose. Windows 8 and Windows Phone 8 users can give Fhotoroom a try.

Photshop and GIMP are too powerful for the people like me while the paint is very naive. No wonder the problems are plenty. This has again forced me to look into the Google chrome webstore as well some online options. Having been a fan of Screenpresso for quite a long time, I needed something along that line. Even, Clipular Chrome extension is quite a good option for those in need. Let’s reconnoiter the Chrome store to find the best Google chrome photo editor extension.

While there are plenty of good options available in the store, we would like to restrict ourselves to apps that is capable of providing good filters, frames, effects and other options. Our intention is to enhance already available picture quickly, similar to photo retouching, so you do not have to waste too much time behind powerful editors (ignoring editors with layers, brushed and other powerful options). Consider this a collection of the best photo editing Chrome extensions for beginners.

Fotor has been my favorite for a while. First, I used it on my Windows Phone and then I got hang of it. It’s also installed on my Windows 8 desktop and use it for simple photo editing and retouching purpose. If you too are a fan of fotor, then you can enjoy all the features of fotor on Google chrome browser as well. It has many great features. 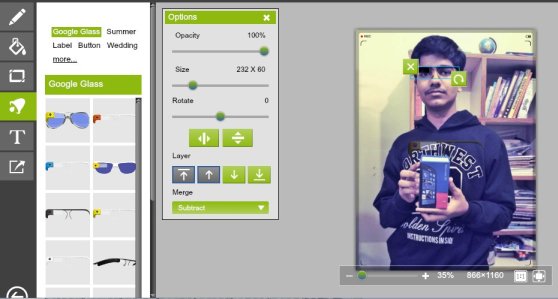 Frames: Many good frames are available including funky, shadow, film edge and other. In case, if you want more, you can purchase the full version to make use of it.

Text: This will let you insert text box in the image. There are many good fonts available to make your picture stand out.

Collage: The collage maker will let you make a collage photos from the number of available pre-made templates. Some funky collage template will let you create a funky photo collage.

Here is the screenshot of our Nokia Lumia 510 contest winner. We’ve applied Google glass effect on him to see how it works. Fotor will let you use image from your computer or social networking sites like Facebook, Picasa and Flickr.

iPiccy is yet another Google chrome photo editing app on the steroid. The Google chrome extension actually takes you to their web interface. Honestly, I would rather not consider both of them as exclusive Google store products. iPiccy also offers similar functions like fotor. However, the face retouch feature offer by iPiccy is quite impressive. Using this feature you can remove dark shades, pimple, wrinkle, shine, blush, red-eye removal, eye color changes and much more. Overall, face retouch option of the app is worth trying out.

Besides that following things are available in the iPiccy chrome extension

It’d be hard to pick best photo editor from fotor and iPiccy as both of them offers almost the same features. However, iPiccy is slightly better as it offers a photo retouch option too.

Would you like to make a Facebook timeline cover from your favorite images? Perhaps, you also want to make the twitter header cover. Pizap has provided both the features so you need not to spend money for hiring a graphic designer for the same. On the top, you can make background images, add webcam effects and create collage from the set of pictures. The photo editing options in Pizap also bring photo cut out tool on the table. It lets you cut the photo or certain part, say head from the body, easily. There is also a meme generator to add top and bottom text on the given images. In a nutshell, if you want something extra then Pizap is a nice little Chrome extension to have on your PC. Filters, effects, variety of stickers, album maker etc. will give your image a unique angle. 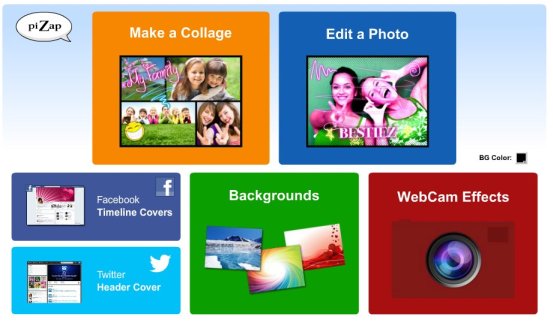 Instead of covering this little gem in detail, I would like you to go through our previous review. Basically, Clipular is a screenshot taking tool but offers great image editing options on the top. There are different filters, text, effects, watermarking, stickers and other options makes it one of the most useful screen capture tools on Google Chrome store. Clipular also saves your images on the cloud making it very easy to access from anywhere. Clipular has found a permanent home on my PC and there is a reason behind that. The ease of access and sheer amount of available options make it one of the best picture editor cum screenshot taking app out there.

Pix is one of the oldest picture editors available for Google chrome. Pixlr offers basic features like borders, overlay effects, text, stickers, effects and adjustment. The number of available borders and other options are less compared to aforementioned apps, hence we have covered this at the last. While most of the above tools also offer seasonal stickers, for example mother’s day, father’s day etc, Pixlr offers a minimum set of stickers to choose from. But then again, they have a wide array of stickers available under each category which makes it much more appealing. In short, Pixlr has its own advantage when it comes to stickers and few other basic effect enhancements. Unfortunately, collage maker is not present in the set of available options.

Since we have limited ourselves from including more than 5 picture editor for Chrome, we believe that there are many other tools out there which need due mention.

As mentioned earlier, there are an array of extensions available in the Chrome webstore which deserves to be listed over here. Personally, Clipular and iPiccy (and fotor) has served its purpose. They make photo editing much more easier for a people like me. Have we missed adding your favorite photo editor for Chrome in this list? Let your voice be heard. Comment here and we will include your favorite picture editor in this list.