The Pokemon has taken the world by one more storm after the major hit it gave with Pokemon Go last year, by launching the Pokemon Duel PC in North America as a western impromptu. It is a mobile strategy game inspired by the game.

The game was released in Japan last year itself as Pokemon Co-Master transporting the typical game into a board game with two teams dueling against each other with six Pokemon figures in each. The main objective of you as a player is to maneuver the squad of your board and capture the base of the opponent when fought against the opposite team.

Pokemon Duel PC is also similar to that which can be played on Windows 7,8 & 10 and Mac too by using a simple Android emulator. With this emulator, you can also play any Android game on your PC. So get ready to play Pokemon Duel on PC! 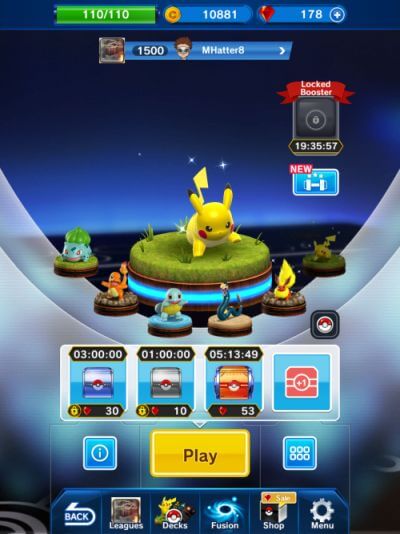 The entire game revolves around fortifying the team, and therefore, it is important to acquire powerful Pokemon figures to improve the team. You can also raise the Pokemon levels and enhance their abilities through the ‘fusion’ option. By fusing a particular Pokemon, you can increase the strength of the Pokemon’s attacks and also can reduce the number of attacks you miss. 😀

During the duels, you collect specific items from the Training Center and test a duel with a predetermined group of decks with various characteristics and capabilities. By doing this, you can improve the skills and achieve the victory. You can receive gems, plates, and different items on winning.

By taking your entire team online and dueling against the real opponents across the world, you can participate in multiple ‘League matches’ where the game starts automatically after being paired up with a team that is in synchronization with your skill levels with similar records.

Leagues can be won after unlocking the Time Boosters as each Time Booster gives you different Pokemon figures and items and also key fragments irrespective of winning or losing which can be used to strengthen your team.

You can expand your inventory by shopping online like purchasing the boosters, plates, figures and also some customized and designated plates directly. You can also try to material trade several items with the materials you have collected after purchasing the time boosters.

Alternatively, you can earn gems to get hold of the time boosters, purchase items for the shops equally as you play the game every day by clearing missions and hopping levels. Therefore, while playing Pokemon Duel PC, make sure that you also earn gems in order to use them instead of real money for in-app purchases.

GamePlay of Pokemon Duel for PC

Pokemon Duel PC has been a high strategy based game introduced on the smartphones which revolve around the Pokemon figures. You can try building a deck using your favorite Pokemon and then go into League matches by competing with users across the world just to enter into the top player list with League rankings that change after each League match. 🙂

Each match has a real time where you can get rewards like more Pokemon, items and XP points that can be used to strengthen your deck after winning the duel. The game involves being the first player of the deck and then carefully build your route by moving the figures. The game is all about strategies, tactics, and logics. 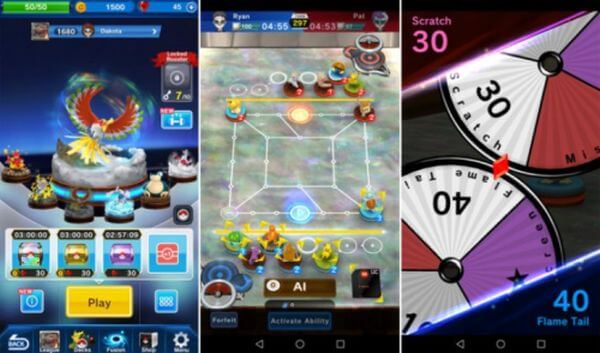 In each of the duel, the deck contains total six different Pokemon with unique abilities and moves and therefore, you need to be very careful about this customization along with the AI which acts like a mentor in crushing the opponents. The Pokemon duel has been launched as a free game to download for Android and iOS devices where you can play against either friends or real people. Download Pokemon Duel on Android or iOS if you are using a smartphone or tablet. 🙂

Selecting the six different Pokemon is the most important task of your game and also planning their moves by checking the compatibility between them in the most strategic way. Once you are done, you can start sending Pokemon in different routes to rush towards the goal and get them engaged in battles. 😀

The battles are won/lost by the attacks of the Data Disks of each Pokemon. Apart from moving and battling, you can also start using plates to swap positions and use various effects.

As of now, Pokemon Duel is not available on PC for most of the countries, and the status is still unknown about Japan and other surrounding Asian countries. Therefore, while playing the game, it is important to change the location in case if you’re making use of the GPS anytime in between to fake your location where the game is officially available.

The process of installing Pokemon Duel on Mac is very similar to that of the PC as you have to get hold of the Android emulator version which is compatible with the Mac OS devices. Therefore, download the Nox App Player for Mac and repeat the procedure mentioned above to get the Pokemon Duel on your Mac.

Pokemon Duel for PC is a high graphics game and therefore, it tracks your location and keeps a note on your game status while you play the league matches which is why you might apparently need adequate space on your device before downloading it cluelessly.

Wondering how you can play Pokemon Duel PC? Well, even though the game is only launched for Android devices, you can try playing the game using the Android Emulators like BlueStacks or the Nox App Player. To do that:

Without these minimum system requirements on your PC, you might find it hard to play Pokemon Duel PC game. So it’s better to make sure that these things are present in your PC before you download and start playing it!

Not an easy game, the rules tend to be confusing and complex in the beginning until you get a hold of it. This game is more like chess between two players involving various power moves and positioning of the six Pokemon figures in the play.

You will come across challenging and surprising losses where you can drag battles till you can. The game has got many good ideas when it comes to actual combat, and therefore, you can sure try and invest your time to gain some fun.

If you have any issues regarding the installation of the game, let me know in the comment section so that I can help you with the issues. Stay tuned to our blog for latest game releases and guides!