Although, I ain’t a great chess player, I always look for best chess app for my iPhone and Windows Phone to hone my skills. Chess is a game that exercises your mind and soul alike. They say, “Chess is the gymnasium of the mind”. The way it teaches me to be patient and wait for the right time to strike has helped in achieving many personal milestones in my life as well. And then there are thousands of great quotes which helped me understand the entwine of life sophisticatedly.

Even, the pawn could turn out to be a queen one day.

Like a real life, the queen can roam around freely while king can move only one step at a time

My journey of chess game began when I stumble flyordie.com while my casual surfing. Initially, I loved the feeling of beating my opponent mentally. More we thing more we understand our opponents move. The same physics apply to our real life as well. But at the end of the game, every piece goes to same block which has transpired my life completely. Keeping asides all the motivations induced by this game, let’s move on to explore some of the best chess app for iPhone users. Let’s start the journey by mentioning some of the free chess apps for the iPhone and iPad first.

How to Free up space on iPhone

Following collection consists of some of the mind boggling chess apps for iPhone users. They are placed in no particular order 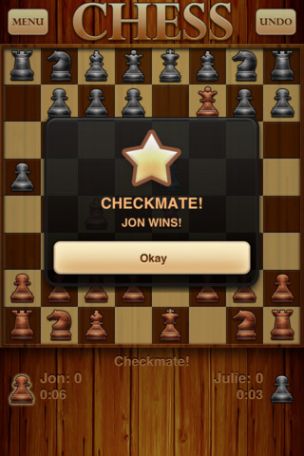 If you’re looking for a best free chess app for iPhone, then look no further. The chess free game has got your back covered, but with a catch. It displays a self-proclaimed unobtrusive banner advertising to help continue development. The premium version  with similar moniker, ‘Chess premium’, is also available in the iTunes store, which removes such annoyance. The game offers a host of exciting features like configurable player name, score tracking, board rotation, undo, enticing sound effects etc. In short, it is the top looking chess app out there in the free games segment. 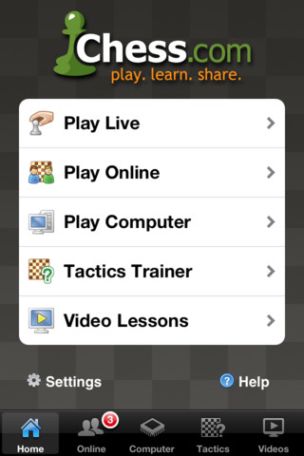 The next game in this class is ‘Chess – Play & Learn’. From the creator of Chess.com, this is probably the most featured-rich app out there available for free. You can choose your opponent, or in case of an absence of Internet connection, you can take on the computer as well. You can play against thousand of real opponent sitting on the other side of the screen. There are heaps of configurable options available to tweak, which makes game playing more fun. The app offers a biggest ever platform for beginners to expert. If that’s not enough, you can enjoy 9 different board designs to choose according to your mood. For beginners, it offers around 50,000+ puzzles improve their skills. Then, there are video lessons to provide you more visually intensive game learning experience. They are categorized based on your skill level and themes. All in all, it is an ultimate paradise for chess lovers. The best part is that it is available for free from the iTunes store. What else you want. The more recent version fixes the frequent crashing bug which was haunting chess games for quite some time. 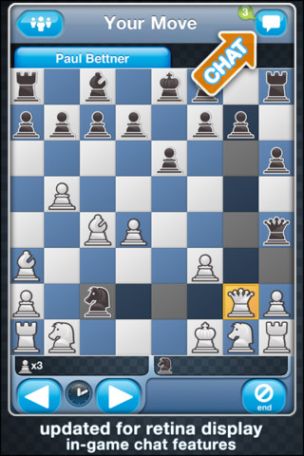 From the gaming house Zynga, Chess With Friends Free, aims to completely revolutionize the gaming experience on your iOS device, especially iPhone and iPad. A last but not the least game in our best free chess game app section. It lets you play 20 games simultaneously with the push notification system. The push notification notifies when it’s your turn if you are engaged with other activities. Either play with friends or play with random player. It also has in game chat system to interact with opponents. The recent version fixes many bugs and integrates support for the retina display device. In short, you will be enjoy it on your iPad as well.

The real awesomeness is realized in paid segment. However, we have to admit that, it was somewhat difficult to pick the clear winner, since the difference between them was marginal or not present at all. Thus, the following section may not be able to do justice to all apps (honest opinion). 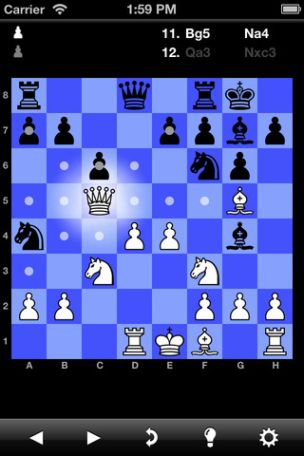 tChess Pro has one of the best interface of them all. The app is specifically designed in keeping iPad retina display users in mind. We, have covered some HD games for iOS devices in the past on our blog (here is similar games for android users). The interface is extremely pleasant and soothing. While keeping simplicity at its heart, the game ensures that it beats any other chess app by providing the strongest chess engine. It gives other games a run for their money by providing several useful tutorials starting from beginners to advanced users. It has a unique algorithm to simulate human behaviour and thus providing superior experience. Then, the integrated PGN database will allow you to download and view PGN files. You can save your progress or check it at a later time. Compared to other game in this class, tChess pro is definitely faster. To experience the awesomeness, the developer has also provided a lite version to the users. You can buy it for $7.99 from iTunes store. 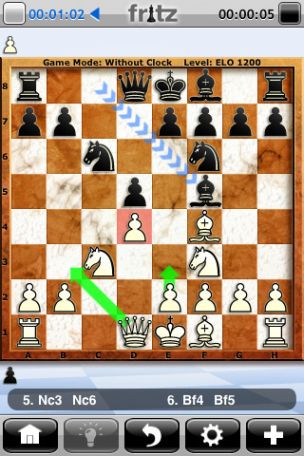 The other popular app in paid segment is “Fritz Chess”. They have slashed the price of the app to $2.99, making it one of the best Chess app at cheapest price. Unfortunately, it has not been updated since past year, so we advise our users to consider finding other alternative. Fritz chess claims to have one of the strongest chess engine in the app store. The multiplayer module lets you play with other worthy opponent. Shake to undo move, drag-drop function, review mode, PGN import, autoflip mode are some of the worth mentioning feature of this game. It also offers an infinite analysis of the game for chess enthusiasts. The game has received mix reviews in the app store, but is something worth considering. 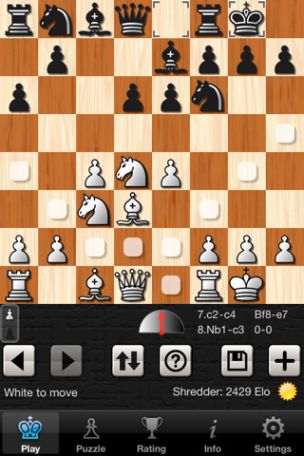 If clean, simple and clutter-free interface is something you are looking in your favorite chess app for iPhone, iPad then look no further than Shredder Chess. The app is niftily designed to train you to make a better chess player. There are 1000 built in chess puzzles to tinker with. Similar to tChess, it offers various levels like beginner, experiences, master etc. It can calculate Elo rating for you and can adjust its strength accordingly to train you for your betterment. Users can analyze their game and look for any possible improvements. The game is priced at $7.99.

We conclude our extensive collection of best chess app for iPhone, iPad and iPod touch users with this. Let us know if you are using any other chess game on your iOS device and want us to include it over here.