There is nothing worse than logging in to your Xbox to play your favorite game, and you find an error message. This is the most frustrating thing and may ruin your mood for rest of the day. There are many error codes that you’ll come across while using your Xbox One. But, don’t worry, most of them are easy to fix with simple tweaks and this Xbox One error code guide explains the same!

We’ve taken a good time to research the reasons why these error codes occur often on Xbox One. And the good news is, we’ve got solutions for most of them. You will easily fix some common issues like not being able to upgrade your HDD, fix disc drive error, Xbox not starting/booting, Xbox One green signal of death, Xbox One not responding, games not installing, and disconnection issues.

So here’s the comprehensive list of Xbox One error codes and their fixes!

8b050033 error code on your Xbox or Xbox One indicates that the Xbox needs an update, but it is not available right now for your console. The issue is mostly related to the Xbox server. Sometimes Xbox servers are busy, and that is why you are facing issues like this.

If you are facing the same error, then try to update your Xbox One again. Check your internet and make sure it is working fine. Also, try to connect your Xbox One with another internet if you can.

If you are using a WiFi router, then reboot your router first and then try again. 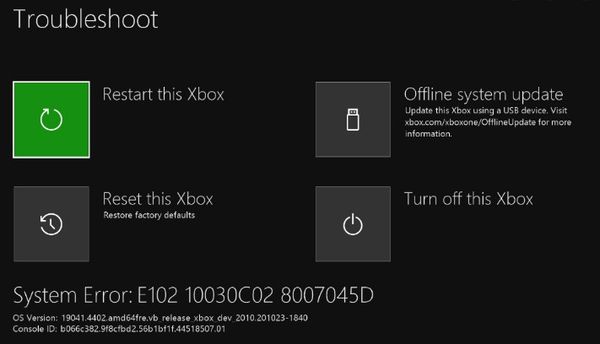 Some users are facing an E101 error code with their Xbox One while using an emergency offline update.

To fix the issue, first, restart your Xbox One and then try again. If you are still facing the same issue again, then you have to contact Xbox support.

Error code E100 indicates a hardware issue on your Xbox One. If your Xbox One hardware is damaged while installing an update or for any other reason, you have to contact Xbox support to repair it because you can’t repair it yourself. 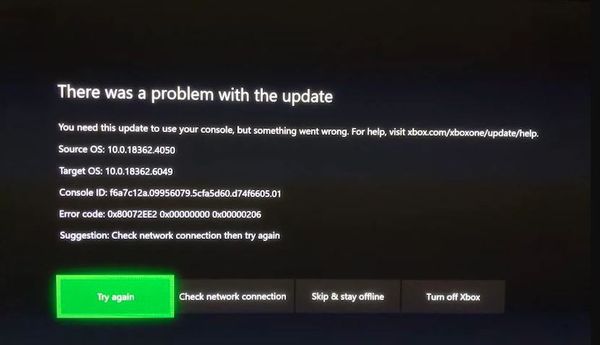 If you are using a wireless connection using a WiFi router, then restart your browser once. Once rebooted, check if Xbox is working fine or not. Also, try to connect your Xbox with a wired connection.

You can press the Xbox button on the front of the Xbox console for 5 seconds to shut down your Xbox One. Then unplug the power cord for 30 seconds to reset the console’s cache.

When you get any error code with E203 XXXXX (here, XX digits vary) on your display, it indicates that the system failed to update the software version of Xbox One. This could be due to various reasons which are still unknown based on our research.

To get rid of any E203 error code variant, follow the below-given steps.

This E200 error code appears on your screen when you try to install or start the game for the first time. This is common if you’re new to Xbox One and not sure about how to get started with the beast!

You have re-install the game again after rebooting the Xbox One. Make sure that you reboot/restart your router too.

This error code is related to the Xbox One sign-in issues. It could happen due to network issues or maybe some problem at the Xbox’s servers.

Try to sign in again to your Xbox account by reconnecting your internet connection. Also, check if Xbox servers are working perfectly or not. If the servers for a particular game or if the entire server is down, you cannot do much about it rather than waiting for it to go live again!

The error code is related to the Xbox One SmartGlass with Android.

The above-listed Xbox One error codes are the most common ones. There’s still a long list of errors and we will get you solutions for the same at the earliest.

That said, here are few common Xbox One problems a lot of users face.

Facing Problems While Updating the Xbox One? Fix it Now!

If you face some errors while updating your Xbox One, you can follow these steps to fix them.

Step 2: If you are using a WiFi router, see if your router is working. Try to use another router if you have one.

Step 3: Press the Xbox button on the front for 5 seconds to shut down your Xbox One console. Once done, remove all the connections and wait for 30 seconds. This process will reset your Xbox One and fix all the issues related to the internet.

Step 5: If you are still facing issues, then contact Xbox support.

How to Fix Disc Drive Issues on Xbox One

If you put your Xbox vertically, then it may cause some issues. Yes, it is correct. Microsoft recommends users place Xbox One horizontally to avoid Xbox One’s disc drive issues. Some users have reported slow game installation problems due to disk drive problems. 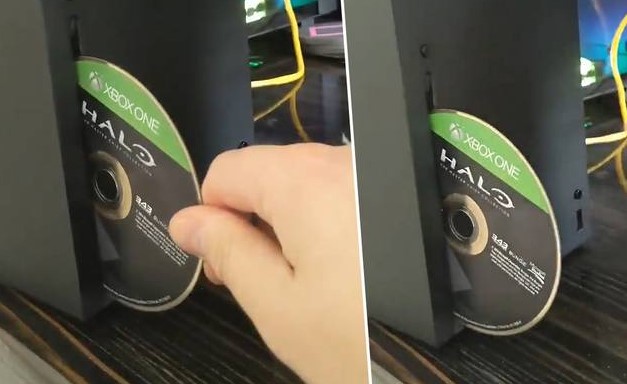 If your disk drive is corrupted or damaged, then you have to contact the Xbox support team to get it fixed. That’s the only way you can do it as it might be a hardware issue.

How to Fix Xbox One Reboots/Restarts Issue

Many users have reported on the Xbox One forum regarding this issue. In this error, Xbox one automatically restarts while playing the game.

Step 1: Remove all the cables from your Xbox One.

Step 2: Restart your Xbox One and then insert the game disk again.

Step 3: Now, relaunch the game and start playing. The error should be gone now.

The Xbox One console won’t power on without the power button being pressed. So if your power button is not working then you can’t turn on your Xbox One.

This problem occurs when there’s an issue with the motherboard. If you’re unsure whether the motherboard is really damaged or not, you can get it checked by an authorized Xbox repair specialist.

Xbox One Doesn’t Recognize your Controller

Many times your Xbox One console is unable to connect your Xbox controllers. To fix the issue, connect the controller to a Windows PC using the USB cable to check whether your controllers are working or not.

If you can see that the Xbox One console recognizes your controllers, you should easily be able to get rid of the red light that indicates that the Xbox One needs a full system reboot. Try to restart your Xbox One and try again.

Xbox One Freezes Up

How to Update Xbox One Offline

Nowadays, consoles have become more advanced, and that’s why they now rely on the internet to update games and system update directly. But sometimes, you can also update Xbox One without an internet connection. Follow these steps to update your Xbox One offline.

Step 1: The first step is to format your USB drive with the NTFS file system.

Step 2: Now, download the offline system update and unzip the file. Move it to your USB.

Step 3: Turn on your console and then hold the EJECT and BIND buttons.

You will hear chimes sound, and then you will be navigated to the troubleshooting screen. Once you see this screen, release both buttons and insert the USB into your Xbox One. 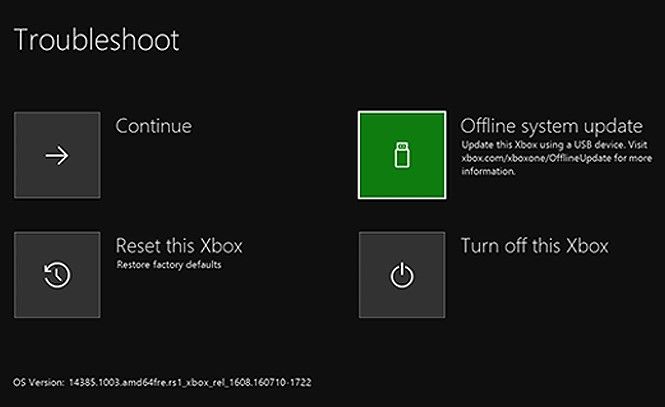 Step 4: Your Xbox One console will start installing updates automatically and restart once done.

Other uncommon issues include incompatible video output adapters and incompatible HDMI output. If you have HDMI inputs on your Xbox One but no suitable adapter for the display connection, then you should consider updating the hardware on your Xbox One. The updates will probably only be minor, and it may be enough to fix your video problems.

In the case of incompatibility with Xbox One gamepads, then you will have to look at whether you have damaged the gamepad beyond repair. For other hardware issues, it may be worthwhile to replace your Xbox One console.

Closing Thoughts on Xbox One

Well, Xbox is still the most popular gaming console and the biggest rival of Sony PlayStation. It may have some issues and bugs but still, it is the best gaming console. Do check our previous post where we explained similar errors of PS5 and their fixes and Disney+ error codes as well. We tried our best to share all possible solutions for all Xbox One error codes. If we missed something, do let us know in the comments.

Rahul is a blogger and a tech geek. By reviewing the latest technology and finding the solution of pesky errors, he feels immense pleasure. Driven by his innate interest in blogging, he adapted blogging as a full-time profession 4 years ago.
Articles: 9