It took the Developers of Debian 2 years of testing to guarantee us the stability that Debian is known for and they came up with Debian 11. it contains 11,294 new packages that avail us access to 59,551 packages in total.

The new Debian has a lot to offer but it requires little tweaks to get the most out of it. So we are going to focus on 15 Things To Do After Installing Debian 11 you could do to get you the best Debian experience ever!

If you have installed Debian 11 from DVD, you will have got following error in your Software center: 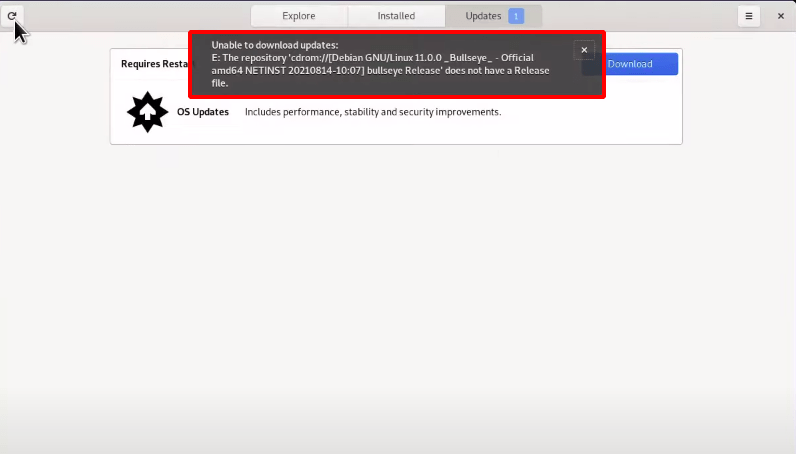 To solve this issue, you have to disable the CD repository. Open Software & Updates from the menu. Select Other Software and you will be given two options. Uncheck both of them and click on close.

The contrib and non-free repositories have many important packages that are not available in the default repositories of Debian. The main reason to add non-free and contrib repositories to our system is they avail us of the followings:

Open Software & Updates. You have to allow two Repositories named :

By default, these two will be unchecked. Check both of them and then close them.

With the help of the community, open-source drivers have gotten far better than they used to be but if you still prefer proprietary drivers, you can download them by the following procedure:

To detect get compatible Nvidea drivers with our hardware, we have to install Nvidia-detect. Use the following commands:

To detect compatible drivers with our hardware, use the following commands:

As you can see we are advised to install the Nvidia-driver package from the previous scan. To do so, use the following command:

Reboot your device and you will find Nvidia x Server settings by which you can configure as per your liking.

AMD open-source drivers work great out of the box but if you still want to try non-free AMD drivers, you can do it easily by given procedure.

Open your terminal and use the following command to download proprietary AMD drivers to your System:

If you do gaming and want to get more out of your AMD graphics card, adding Vulkan support to your machine will help you a lot.

Use the following commands to get Vulkan support in your Debian machine: 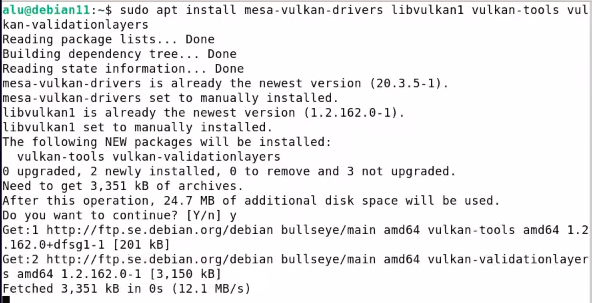 Build-essential packages are great when you want to build your software from a source such as Github. Installing these packages just after installation is a good idea. Use given commands to install build-essentials

Due to copyright issues, Debian does not ship with proprietary packages such as Microsoft fonts and many video codecs which are essential for playing different types of multimedia files.

We are required to use the following command to download restricted extras: 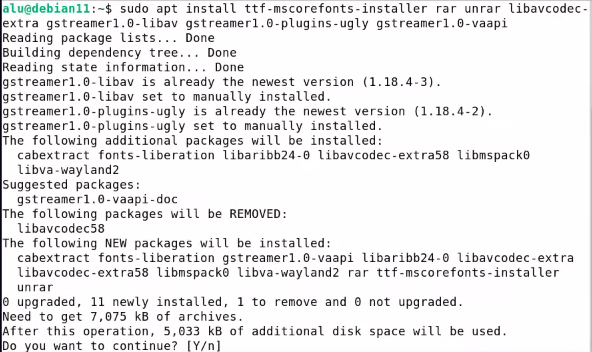 When you install Debian you get a swap space which is used when your RAM has less space available for running your software. It’s a space allocated in your Hard Drive which is much much slower than RAM.

When we decrease swapiness, we are giving instructions to our system that use more RAM as possible.

First, let’s see the current value of swapiness in our system by the following command:

First, let’s open the configuration file by the given command:

Now we have a line given below at the end of the file: 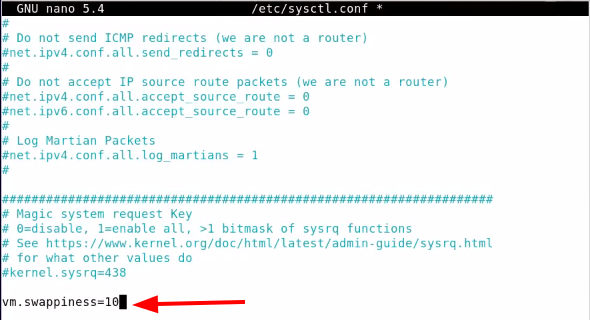 Press CTRL + O to save it and CTRL + X to exit from the configuration file.

Now, restart your system to apply the changes we made in the configuration file.

After rebooting use the given command to check the value of swapiness;

We all know that Linux is the Safest Operating System of all but still having an active Firewall to your Debian System is necessary for being protected.

First, let’s install the Firewall by a given command 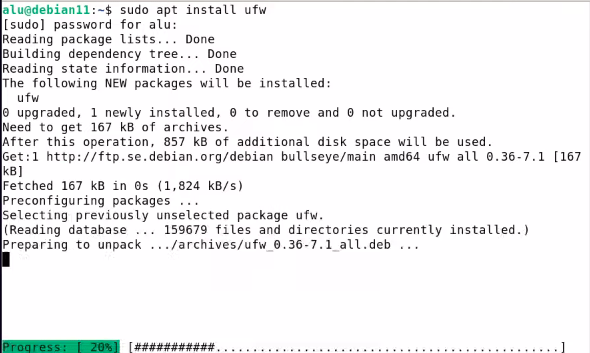 To check the status of our firewall, we will have to use the given command:

If you don’t use the multiboot System, you can skip the initial GRUB screen and save 5 seconds in boot. We are going to make changes in the GRUB configuration file to reduce time.

Open your Terminal and open the GRUB configuration file by the following command:

Now you can see you have to change the value of GRUB_TIMEOUT = 5 to 0. 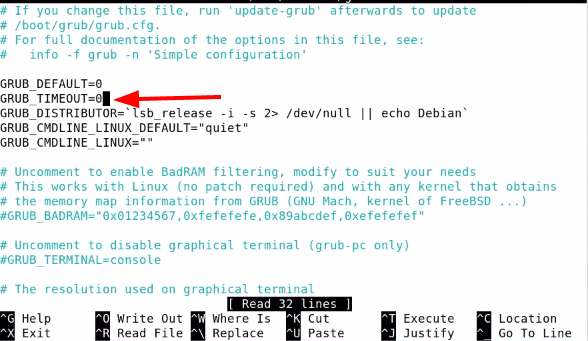 Press CTRL + O to save the changes and CTRL + X to close nano.

To get those changes in work, we are required to update GRUB by the following command:

Reboot your Debian machine and that’s it.

GNOME can be highly customized but has a small number of extensions preinstalled. To get access to thousands of extensions, visit the official site for extensions.

Click on the “Click here to install browser extension” and you will be forwarded to the extension store.

Click on Add to Chrome and an extension will be added to your Browser.

By default, GNOME won’t show the icons of currently running Apps such as Telegram, Zoom, Dropbox, and many others. You can enable it by downloading the Topicons Plus extension.

Download Topicons Plus from your browser by clicking on the Off button.

You can configure this extension in Extensions App

For users who are used to having to maximize and minimize buttons like me, you can easily do that through the GNOME tweaks.

Open Tweaks from the Menu

Select Window Titlebars from the left bar. And you will be will options where you can enable maximize and minimize buttons.

If you are someone who works all day long in front of the computer, having Night Light enabled can protect your eyes from harmful blue light coming from the Display.

Open Settings from the menu and select Displays from the left bar. Click on the Night Light and You will be given an option to enable it. Enable it and your Eyes are safe 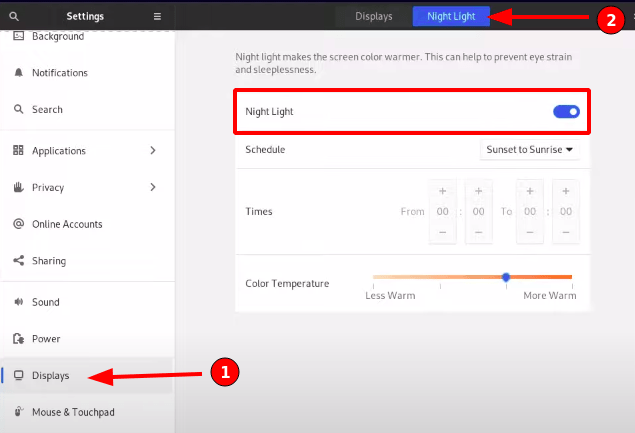 By default, you don’t get Snap packs or Fatpacks enabled in Debian. But you can enable both of them easily by the following procedure.

Open the software center from the menu and search for Gnome software. Select the most appropriate result.

Scroll down a bit and you will get options to enable Flatpack and Snap support. Enable what suits you the most.

Reboot your system to activate the changes we made.

14. Elevating Administrator Privileges for your user

In Debian, by default, your user will not get any Administrator privileges and you will get the following error:

To get your user Administrator rights, follow the given commands:

Now, enter the given command to add your user in the Sudoers file:

Change your username with geniusgeeks

If you are using Debian on Laptop, you can save your battery by tlp. Tlp is a power management tool that helps us to save battery.

Install tlp by the following command:

Reboot is required for activating tlp.

To check whether tlp is working or not, use the following commands:

As you can see, it’s in an active state.

Debian is a rock-solid distro but requires some work after installation and after following 15 things to do after installing Debian, you are ready to enjoy what Debian has to offer.