NGINX is known for being one of the fastest web servers and is considered one of the best open-source load balancers. There might be scenarios when you are required to reinstall or completely remove NGINX from your system.

We will guide you through the complete process of how you can uninstall NGINX from Ubuntu 22.04 or later with backing up configuration files and the reinstallation process.

What is NGINX and What Makes it Special?

NGINX is pronounced as “engine-x” widely known for its superfast web servers and being open source adds up a sweet layer of security over it. After getting success as web servers, they have also started services such as reverse proxy, HTTP cache, and load balancers.

It is used by some of the biggest tech giants around the world including IBM, Google, Adobe, LinkedIn, Cisco, Facebook, Twitter, Apple, and many many more.

The key advantage of NGINX is that it uses less memory with high concurrency. Rather than making a new process for each request, it handles multiple requests in a single thread for better efficiency. 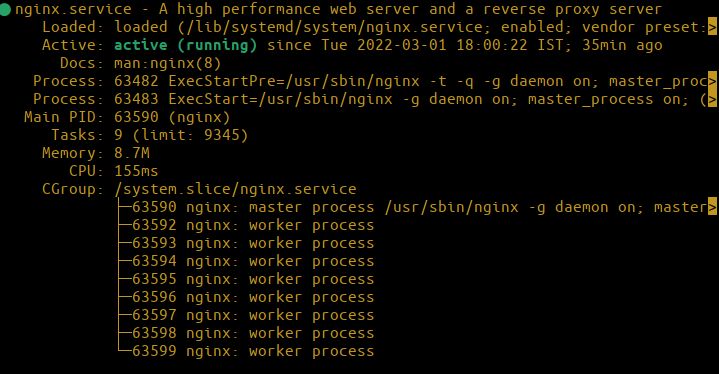 As you can see it’s running in the background. Pass the following command to stop NGINX:

As you can see, NGINX is not running. We can proceed further in our uninstallation process.

Backing up and Deleting Configuration Files

we are going to purge NGINX to remove dependencies and old configuration files but if you think some important files should be kept alive, you will find files at /etc/nginx and your site content will be at /var/www.

For backing up, use the following commands:

as same as above, we have renamed site data stored at /var/www to www_bk

if you don’t need those files anymore and want to remove them completely, use the following command:

We have deleted both files using a single command.

After having a proper backup, we are ready to remove NGINX from Ubuntu System. The reason why we are going with purge is we want to remove all the previous configuration and dependencies. Use the following command to purge NGINX from your system:

This is the last step where we are going to remove unnecessary files from our system. Use the following commands:

As you can see, unnecessary files have been removed and freed 2,333 kB of space. 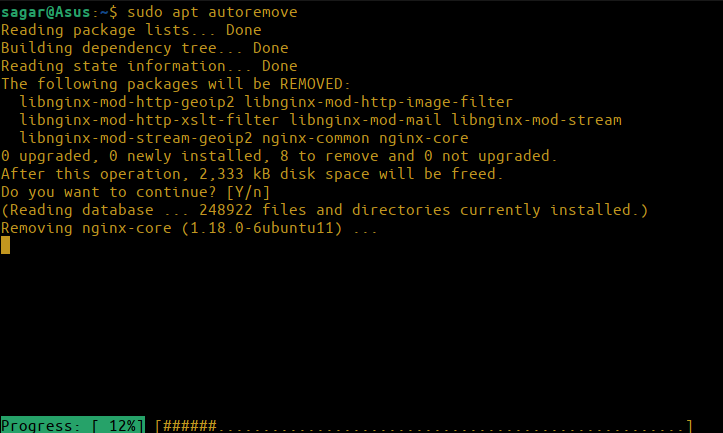 After clearing all the old mess, we are ready with a clean system for the fresh installation of NGINX. When you reinstall NGINX, it will generate new files at /etc/nginx.

Use the following commands to install NGINX

You have a fresh copy of NGINX installed with the default configuration.

Where is nginx conf located?

How do I stop and start nginx?

if you are using an older version of Ubuntu use the following command to restart:

NGINX is one of the fastest web server providers and gets you great performance. It generally does not cause any problems but if you still get any, you can easily backup your data and uninstall NGINX from Ubuntu 22.04 and reinstall it again.