An operating system is a program that maintains and controls the hardware and other applications on a computer. OS is required by all computers and computer-like devices, like your smartphone, tablet, smartwatch, and router.

The Windows operating system manages, coordinates, and controls all aspects of desktop publishing. It serves as a link between the computer system’s hardware and other software.

Linux is an open-source OS that allows a computer to run efficiently. One of its primary duties is to send data to the CPU for processing and to display the results on the hardware. The major goal of developing Linux was to create an operating system that functions similarly to Unix but can run on various hardware, from phones to quantum computers.

Every Linux-based OS includes the Linux kernel, which manages hardware systems, and a collection of software platforms that make up the operating system. Because Linux is an open-source operating system, different Linux distributions may include different software combinations.

The operating system includes several common fundamental aspects, like GNU tools. The user can use these tools to manage the kernel’s resources, install extra software like GParted, and modify security and performance settings, among other tasks.

The initial version of Windows, known as Windows 1.0, was released in 1985, following the foundation of Microsoft. The MS-DOS core on which it was built was the most widely used Program Manager for executing applications.

After that original release, it received its first major upgrade in 1987, succeeded by Windows 3.0 the following year. To improve the user experience, that version of Windows used a 32-bit user interface and a 16-bit DOS-based kernel. It was a fast-paced evolution, and Windows 95, the most commonly used version to date, was released in 1995.

When it comes to the operating system’s core architecture, it hasn’t altered much since Windows 95. Many new features have been introduced to match the demands of modern computing, with some features we recognize now included in previous versions of the OS. It contains features like the Start Menu, taskbar, and Windows Explorer (now known as File Explorer), all included in Windows 98.

Linus Torvalds, a Finnish student, invented it intending to create a free operating system kernel that anybody could use. In 1991, Linux was released after Windows.

Although it is still regarded as a relatively basic operating system without a graphical user interface like Windows, it has developed from its initial release of just a few lines of source code to its current state of over 28.8 million lines of source code.

A Comparison Between Linux and Windows Operating Systems in Detail

Here are some factors we considered while analyzing the Linux vs Windows operating system comparison. 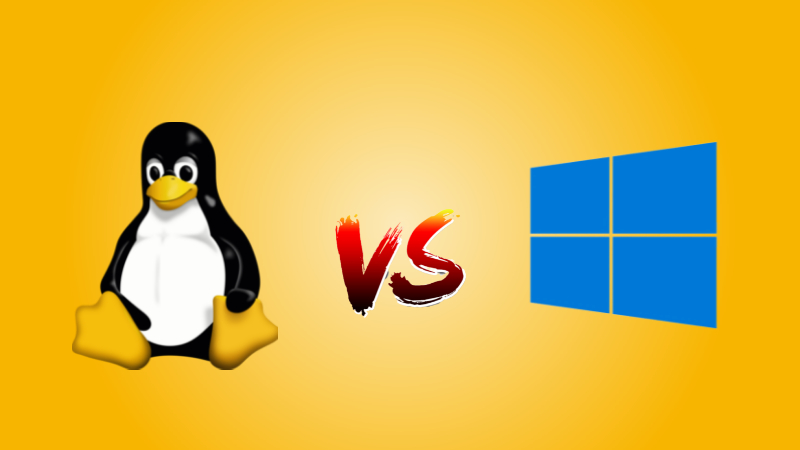 The Linux operating system takes considerable care to protect the privacy of its users. Its built-in state-of-the-art encryption function ensures improved security and reduced intrusion from third-party programs for users.

In recent years, Windows has become increasingly reliant on advertisements. Users can opt-out of the commercial, but Microsoft has a clear view. Also, with the help of their synchronization monitor, Windows is aware of what you’re doing on your PC to improve the assistant. Therefore, it’s essential to go a step further in securing your online activity and offline data with the help of a VPN.

The level of security a VPN provides is not biased by the operating system being used. On the internet, both Windows and Linux send and receive data packets.

Part of this communication entails informing other systems of the packet’s destination. The packets are the same whether your device is running Windows, Linux, or Mac OS to browse the web.

Fortunately, privacy is enhanced by installing a VPN for PC by routing your internet traffic to another server to provide you with a secure connection. Anyone who observes this traffic will notice that your computer is conversing with another machine on the network. It prevents them from snooping on the websites and services you use on the internet.

The ability to live’ boot Linux Operating systems, that is, booting off a USB image or DVD without installing an additional OS on your machine, is a unique feature. It can be a fantastic method to rapidly see if you like a distribution before committing to it.

The distribution can then be installed or run live for as long as you need it from within the live-booted OS. While more polished distributions like Ubuntu are simple to set up, some less user-friendly versions take a significant amount of technical knowledge to get up and operate.

Regarding security, Linux is regarded as the most secure operating system compared to Windows. Even if new attack vectors are discovered in Linux, the system’s open-source technology allows anybody to examine the faults, improving the process of detecting and correcting vulnerabilities faster and easier.

Because of its vast user base, Microsoft is continually vulnerable to new threats. Despite making significant progress in upgrading its security system over the years, malevolent hackers continue to target Windows. On your Windows 10 PC, you can connect to a virtual private network for work or personal use.

When working from a coffee shop or other public location, a VPN connection can give a more secure connection and access to your company’s network and the internet.

Many Linux users prefer to install a free, open-source version instead. Almost any program you can think of has an application. If this isn’t the case, you can use WINE or a virtual machine to run Windows software on Linux.

Despite this, these solutions are likely to be amateur attempts compared to Windows. Most programs are installed from a software repository associated with a particular distribution. In addition, Linux software executes programs differently from Windows software. If your business requires a specific application, check whether Linux has a native version or if a suitable alternative exists.

In the software stakes, Windows has a significant edge over Linux in that practically every program is built up from the ground up with Windows support. In general, compatibility concerns do not affect Windows users.

While Linux is gradually making inroads into the gaming business, even with the addition of beta support for numerous games, Linux still has a long way to go. You’ll miss many games if you buy a Linux operating system.

Compared to Linux, Windows came out on top in the gaming battle. Many clients, such as Steam, Epic, and others, are available for Windows users, allowing them to play AAA and indie games. Furthermore, because Windows has such a big user base, many graphic card manufacturers concentrate their support on it.

Linux outperforms Microsoft in many aspects. The open-source solution is popular for its speed, reliability, and security. However, a more complicated setup comes with this level of dependability and security. To set up the Linux system perfectly, you’ll need some expertise.

On the other hand, Windows are built for people without prior programming experience. Windows OS is primarily used by users who want a working system that does not require complicated setup or prior setup knowledge. Because of its ease of use, Windows is very popular, and many people prefer it.