Back in 2009, iPhone has been considered as a status symbol. It was called as a luxury device. However, as of 2013 the device is no longer considered as an expensive piece that only top of the food channel people can afford.  Apple iOS devices not only changed the definition of a smartphone but also the definition of mobile apps. iOS apps made the iPhone device much more useful. iPhone 5c would be among the latest mobiles in India that thousands of people are waiting for. On this diwali Nokia and Apple is planning to launch few smartphone. In India it is still considered as a luxury. Most of the iOS device owner owns a car. Would you like to find out the best iPhone apps that you can use in your car?

These iPhone apps for car is selected randomly from the iOS store. However, this curated list of apps will definitely make the entire experience a pleasant one for you. In our previous encounter we shared some of the top notch apps for nexus 7 which might be useful for you. Android users can also take a look at our collection of best android video editing apps and many other. 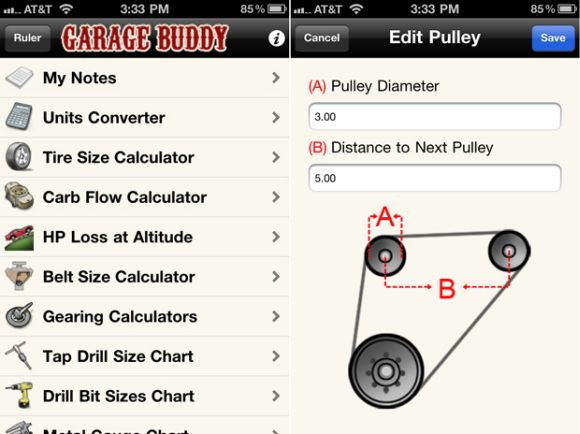 Dynolicious : There has been a lot of talking about this app in many newspapers and magazines recently. This app is very useful for various purposes such as measuring horsepower of your car as well as keeping the history of your car’s performance.  It also offers comparison by keeping the track records.

AccuFuel : As the name suggests, this app keeps an accurate measure of the fuel consumption of your car. It uses some standard formats such as liters per kilometer. The app is capable of tracking many cars at a time.

Rev : This is a costly app and it is for the iPhone. But it does its job 100% when it comes to service for the cost. It can monitor emission and also monitoring the amount of fuel used by the car. If you are a car person and want to be up to date then this is the app that you need. This will relieve you from many tasks.

DMC Speedometer : It’s an iPhone app. Not very costly but a good one. It takes help from the GPS to calculate the actual speed of your car. It calculates the kilometers you travel in a specified time say 1 hour and lets you know your speed.

Garage Buddy : Not so costly, here is another useful app for car owners. Garage buddy is an app which will give you all the necessary guidance related to repair of anything in your car. It is equipped with some of the most important tools like charts and calculators for repairing work. The same application is also made available for the android users as well.

Fuzzy Car : It finds its use mostly in decoding the errors  produced the the car engine. It also gives you a solid measure of consumption of fuel by your car and what mileage it gives.

Fuzzy Code : This is an absolutely free iPhone app. This app may be considered as a replacement for the fuzzy car app. This will provide you all the details you need to decode and repair. You need not go to the shop for purchasing the repair manual, just have this app and rest aside.

gMeter : It uses the accelerometer which is provided in your iPhone. It gives a measure of distance covered by your car and the velocity with which it is running. It also shows the engine power of your car.

iSpeedCam world : This is a new app in the market of iPhone apps. The app is designed for flexibility. It can be automated according to your needs. It can be quite useful in speed trap alerts and traffic cameras. It also has GPS tracking which is a plus one.

While we did our best to find out the best iPhone app for car users, there might be some apps which might be missed out. Rest assured, we will cover them in our upcoming post.