Android P is one of the recent Android versions available after the Android Oreo. With the development going at a rapid pace, another Android Developer preview has been launched with more details and features about what the OS upgrade has to offer. The first few versions of Android P (just like any other upgrade) won’t have much because these previews are usually designed for the developers who would want to know how the upgrade is working and further, make changes accordingly. However, even with you not being a developer, it is easy to get the latest Android P on your Pixel phone easily.

Getting Android P on your Pixel device is just the same as flashing an Android factory image and therefore, you only have to know a little more than the knowledge of tapping a button. Before we actually go through the detailed process of sideloading the updates, it is recommended that you know how to work with Android SDK and the Command Prompt/Terminal in order to avoid any potential harm during the process. In case if the Android Software Development Kit is not available on your PC, you can download it from the official website of Android Development and install it following the instructions. You can do the same with Terminal if you have a Mac.

As mentioned earlier, to get the Android P Developer Preview, one has to manually flash the software image. By flashing the device, you’re acquiring control over the test environment or will be asked to reinstall the device. In cases where you’re considering the dabbling in ROMs which are bouncing around from one to the other, you can even try this. However, installing an image on the phone gets rid of all the data and therefore before proceeding, back up the data carefully.

How to Get the Flash Image of Android P? 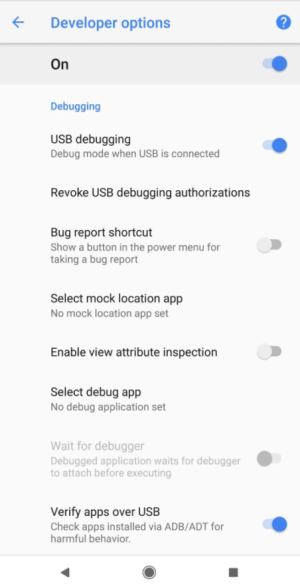 The Pixel phones are manufactured from the Google directly and therefore, will have a bootloader that you can unlock.  Therefore, in order to manually flash the software, you have to unlock the bootloader.

To do this, you have to get into the bootloader, first. You can either turn your phone manually off and then hold the power and volume down button together to enter the Bootloader menu or you can enter the commands in the command prompt.

Connect the device to the computer and then run below command only to see it return a string of characters after which you will be set to update the device.

Now go to the menu and then run the below command.

There will be many things listed at the bottom including the lock of the device. It usually says locked so that you have to unlock it. In case if it is not, it means that you have already unlocked your bootloader in the past and did not lock it again.

The bootloader on your device is unlocked and it is time for you to flash the new firmware image. Initially, be sure that you’re in the bootloader menu and check that your bootloader is unlocked. Check whether your computer is communicating correctly with your device and that your serial number comes as the connected device. Enter the command:

On doing this, you will have a blank screen but there will be a dialog on your command prompt. When the flashing of the bootloader is done, reboot the backloaded making sure that things are working.

Here, you have updated the bootloader and now you have to flash the radios with cellular inbuilt radios in it. To do it, go to:

After being done with these processes, you can now flash the system image to your device.

To unlock the bootloader which is needed for flashing a stock image, you should enter a set of commands. Unlocking the bootloader will factory reset your device and therefore, all the data will be lost. Make sure that you have backed the data before in order to prevent any loss and then enter the command:

Reboot the bootloader in order to be sure that things are going in the right way before you flash the firmware image.

The following code will erase the data on the device and therefore, you can delete ‘-w’ from the line, but then if you have a beta version Android, it is recommended to enter it as it is:

With this, your phone will restart normally. All the device data will vanish and it will take a certain time before you can actually use the phone. You will be greeted just like at the start and will be taken through the device setup as if you have installed a new OS on your phone.

Why Use Flash Script for Flashing the Firmware Image?

In cases where you do not want to manually enter the commands, you can avail the scripts that are available with the downloaded system image in compressed folders. These script files are automated and therefore, can flash the bootloader, radios and the system image on its own. The only issue is that you should unlock the bootloader before you flash the script or else it will not run.

How to Downgrade to Oreo if you Didn’t Like Android P?

After having the maximum fun with the Android P Developer Preview, you might want to get back to the Android Oreo knowing that it is not stable as a daily driver. The process for it is indeed simpler and you have already learned to do it. There are only two changes in the above procedure, where you have to download the Oreo factory image and then flash it. Once you’re done flashing, you can lock the bootloader for increased security. It is easy to switch between both the upgrades, but doing this frequently might cause hassles to your device.

Concluding, Android P Developer Preview is exotic and it will take some time to get the best version available in the market. It might sound a bit worse, but it is not entirely difficult to get the preview on trying it for the first time. In case if you haven’t, it is still okay as all of us are not actually equipped with the knowledge of using the commands. Therefore, take time in reading through the guide and try till you’re successful but only be careful about the data.

Stay tuned to our blog for more details on Android P release date.