PUBG Mobile has been setting a trend in India and lately, over the times, we have seen that parents are worrying about their child’s addition towards the game. I personally urge people not to play this game for more time. It’s for fun, don’t make it an addiction. And this is why PUBG Health Reminder feature is being tested in India.

But if you want to ruin your future and want to remove health reminder in PUBG mobile, then no one can stop you from doing it after reading this post. But let me first tell you why this is happening only in India. Recently, Gujarat Government has imposed a complete ban on PUBG Mobile game and the people who were found playing this game were arrested by the local police. 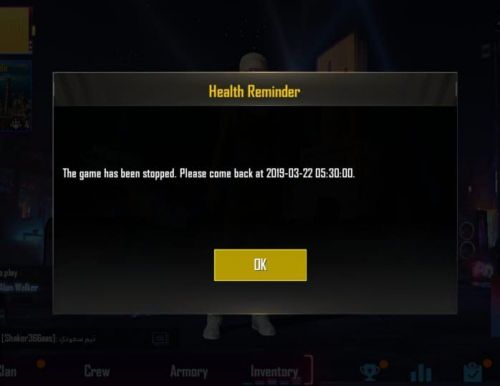 Keeping in mind with this, the PUBG developers are now testing a “Health Reminder” so that kids don’t overplay PUBG on their respective devices. In this PUBG health reminder, a pop-up appears once you have completed 6 hours of play. And this is annoying most of the addictive users in India today. This is leading the players to search “How to Remove Health Reminder in PUBG Mobile Game?”

Before you know the process I would like you to inform that you might see a notice “The Payment Has Been Cancelled Your Account is at Risk PUBG” when you try to remove the health reminder. So try this at your own risk!

How to Remove Health Reminder in PUBG

#1. Once you’ve played more than 6 hours of PUBG Mobile game, you will see a pop-up of health reminder saying that “The game has been stopped. Please come back at XYZ (Estimated Time as per your timezone).”

#2. Now make sure that you don’t click on OK button until the game starts. If you do so, it will ask another question after some time as shown in the below image.

#3. If you click on YES, you will banned by PUBG for sure and your account will be at risk. Instead, you need to click on NO to make sure that your PUBG account is working smoothly.

As you can clearly see that the YES button is cleverly placed on the right side where most of the users click. So focus on the NO button where you need to click.

So this is how to remove health reminder in PUBG. This is the only fix to this issue as of now. If there’s any other solution, I will be uploading it soon!

IMPORTANT NOTE: It’s important to understand that why PUBG has taken this step. It’s for you, it’s for your future. It’s done because you’re utilizing your precious time in a game that earns you nothing at the end of the day. So make sure that you play this game just for fun and don’t get addicted to it.