The IPSW is an acronym for iOS firmware. When you fire iTunes on your desktop, it usually checks for latest IPSW on Apple server and compares it with the current version running on your device, provided you’ve connected your device to PC.

Whenever Apple releases new firmware it prompts users to download and update their iPhone, iPad, iPod touch and Apple TV to latest firmware to ensure your device is safe from any vulnerability (and loophole exploited by jailbreak developers). The never ending mouse and rat race begins whenever Apple releases new iOS firmware by patching the loophole in previous one. By providing occasional update Apple also ensures that unlockers do not slip away from carrier contract duty.

In a nutshell, Apple tries to update baseband and firmware by releasing new IPSW file whenever security concern arises or new features have been implemented. The iOS devices (be it iPhone, iPad, iPod touch or Apple TV) firmware has .ipsw extension hence it is often called as IPSW firmware. Since there are already handful of versions out there, people would have to search for them on the web for hours and hours. However, there are few apps out there which will let you download all iOS firmware no matter which version you want.

The most easiest and preferred option to download any iOS firmware is via iTunes. iTunes notifies the users whenever the new firmware for the connected device is available. However, it is not always a preferred method for many reason—fear of loosing jailbreak, unlock are few of them. 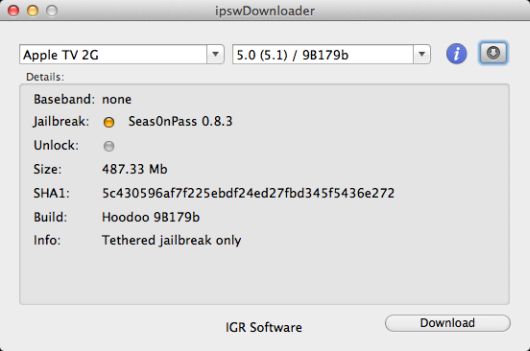 ipswDownloader: As the name implies, ipswDownloader is a dedicated web app and tool working on both Mac and Windows PC. For those who preferred to download directly via web can go to http://ipswdownloader.com and select the appropriate device, its version and firmware version t begin the download. There is also a dedicated downloader with built-in resume/ pause support made available by Korich.

ipswDownloader has pause/resume support, Multilanguage support, support for baseband and jailbreak information. Those who are new to jailbreak community will find it extremely helpful since it mentions whether it is feasible to jailbreak the said firmware or not. Windows PC users can also use portable version with built-in download manager support./

Note: The site is in Russian language but it is quite easy to get the download link from sidebar.

openIPSW: Initially, openIPSW was made available to Windows users only. As an alternative of ipswDownloader, openIPSW has grown a lot. Now they have a dedicated web version along with Windows and Mac application. It will provide basic information like baseband version, jailbreak availability, jailbreak tool, unlock possibility and SHSH blobs availability.

It also has pause and resume support. They had a portable version but it doesn’t seem to be available anymore.

Felixbruns: Unlike above dedicated tools, felixbruns has only web support. It means you’ve to download the firmware through their website only. Felixbruns lets you download iOS firmware of Apple TV, iPhone, iPod touch and iPad.

Users can directly restore to new firmware through iTunes by clicking shift+Restore button in Windows PC and option+Restore button on Mac. After that you have to navigate to the downloaded iOS firmware for your device.

In case if the file extension is .zip, then you can rename it to .ipsw. This usually happens when you download iPhone firmware via download manager. Jailbreakers can use sn0wbreeze or redsn0w to cook custom firmware out of stock firmware grabbed from Apple server. This will ensure that you do not update your baseband accidentally, which indirectly ensures that you retain your unlock provided ultrasn0w has been updated by the Dev team.

Do let us know if you’ve any trouble in downloading iOS firmware from above mentioned sources.