Smileys and/or emoticons have a special place in the online world. When things cannot be explained by words, people prefer to use signs. This same real world concept also exists in the online world. The root of smileys goes as deep as the Internet. However, Yahoo! Messenger should be given the credit to use them extensively on their platform.

They made them one of the most demanding feature for chatterers. Facebook, as a prominent social networking website, also gives users a liberty to express themselves through different emoticons.

There are several emoticons or smileys available to express your mood. It not only adds an elegance but also comes in handy when you do not prefer to write a long paragraph just to express yourself. Perhaps, this is why they say, an image is worth a thousand words.

Facebook is the pioneer in introducing new features. For example, they introduced a timeline feature which we covered in the past. Even, we shared the specific dimension to design the Facebook timeline cover along with several websites to download them. Facebook has introduced several emoticons which you can use in chat and timeline messages.

Unfortunately, most of them are  hidden treasures which is not available openly to the end-users. There are literally thousands of emoticons supported by Facebook to reflect your mood or opinion, but then you don’t have the exact code to display them. Why use filthy words when you hate or dislike something?

Instead of that you can use popular middle finger, or dislike, emoticons on Facebook. Even, you can use poop sign if someone is jabbering too much. Then, there is a trending Gangnam style Facebook emoticon for a chat, which makes you ROFL. There is already a provision to insert smileys in Facebook chat system (look at the lower right corner in chat), but they are limited to few emoticons only.

If you’re hailing from the Yahoo messenger land, then you would feel the lack, or absence thereof, of such inbuilt smileys. There are a plethora of them on Yahoo! Messenger. Let’s dig the hidden gold mine of Facebook to bring some of the best emoticons used in the Facebook chat system. We will restrict ourselves to Gangnam style, middle finger and poop emoticons since they are more in demand.

Well, this is probably the most intriguing emoticon available for Facebook users. Just copy and paste the below code to your chat window and hit enter.

You will see something like this. Oppa gangnam style fever is now on Facebook chat as well. 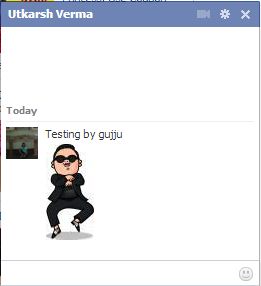 Somehow, this still seems to be on the top of the list. People prefer to use this specific symbol to mention their unhappiness or dismal mood. There are two simple ways to achieve this

The above code displays a simple and small symbol shown in the screenshot. 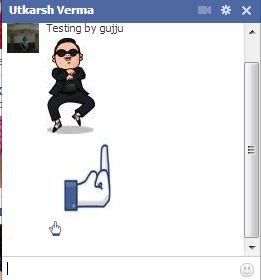 The other code is

The above code will display a large image as shown in the screenshot. You can express your dissatisfaction about the situation or status message. Once again, both of them works with Facebook chat only.

Facebook chat emoticons do not work in the comment or status message. They are best used in Facebook chat system only. Just simply enable the chat and click on the person’s name whom you want to chat with. Copy-paste the above codes in the Facebook chat bar and hit enter. Their system will automatically display the emoticon based on the code.

Which Facebook emoticon do you use often? Also, let us know if you are having any problem in using the middle finger or Gangnam style emoticons in Facebook chat system.