Dropbox just stepped up its game by offering a new two-step verification method to secure Dropbox account on the go. Following several stagnant security issues, Dropbox has rolled out a new two-step verification system to offer respite to end-users. Many of Google account users are already using a similar verification system to make Google accounts hack proof. Dropbox especially faced critical spamming issues through various account due unsolicited access to them. Despite of facing several security issues, Dropbox failed to implement any solid security, until now.

The two step verification system in its preliminary testing phase. Much similar to Google’s two-step verification system, it offers a special code or password through text message or Google Authrticator smartphone app, which then you have to input into the application to completely unlock it. The whole system is designed in such a manner that whenever you login to your account from different PC or gadgets, you will be asked to enter the second code to unlock the account completely. So even if your primary password is stolen, hackers will not have access to secondary password sent to your device. Such a hack-proof system is called as a two-step verification system. It is a really welcome move on the part of Dropbox, since this will ensure the maximum security of the user’s account.

Since the feature is in the infant stage of testing, you are required to download and install the latest version of Dropbox i.e. Dropbox 1.5.12. In order to secure a Dropbox account with the two-step verification system, you would either need to download Authentication app or choose to receive a code via text message. This 6-digit security code or secondary password will secure Dropbox account from any Outlanders. 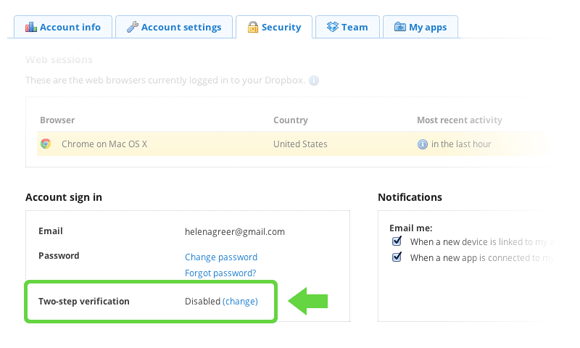 Dropbox has also mentioned that they will roll out the two-step verification system sometimes next week. If you have patience, then you can wait for Dropbox officials to provide stable security check system. It will add an another level of security to your old method.

After the recent Google Drive release, we have started using Google Drive as a primary cloud storage service. That doesn’t mean that Dropbox is any less good. Interested people can go ahead and check out some of free cloud services to add more storage in the cloud. Moreover, if you’re amongst one of those who like to manage multiple cloud storage service can check out this link for more information.