The world was in stands until we found out that Microsoft was discontinuing our beloved Adobe Flash Player. YES!!! Microsoft has given an official statement informing all users that it is going to discontinue its support to the Flash support. Adobe has dropped all support and has said that after December 2020 there will be no further updates and neither will Adobe Flash Reader be available on the website for download. What’s more is Google, Mozilla and Microsoft have said that they too will stop Flash Reader from their web browser Chrome, Firefox & Edge respectively. And this is the only reason why users have started searching for Adobe Flash Player alternatives. Of course, it cannot be replaced but there are various substitutes for the same!

Why did Adobe Flash Player Shut Down?

Adobe Flash Player without a doubt has been the turning point in industry when it was launched and created havoc upon websites making them look primitive if they had not used the software to update their contents online. This trend took a go and everyone adopted the type and fame of Adobe Flash Player to make their sites look more eye catching and attractive.

Even with the spread like a wildfire, some big guns in the industry like Google and Apple did not support or accept this software from the word go. Steve Jobs, the co-founder of Apple took it on a public stage to list out all the disadvantages of the Flash Player. Since then, step by step, we have gradually seen the demise of this software to the point now that it has vanquished and now users have started looking for Flash Player replacement options as well.

Here are a few reasons pointed out by the technology experts as to why Adobe discontinued Flash Player.

This strain increased until 2017, when Adobe, Google, Apple, and Microsoft agreed that Flash would have to be absolutely abandoned by the end of 2020. Even the most committed fans of Flash began searching at Adobe Flash Player replacement after the news broke. Since then, people have gone all the way to try and find the best Adobe Flash Player alternatives.

What is the Best Flash Player Alternative?

It is always difficult to replace the best there is. It is nearly impossible to replace Messi from Barcelona, M.S Dhoni from Indian cricket team and Kobe from our memories since they were the best there was. Yet as it is said, life moves on and so should we. 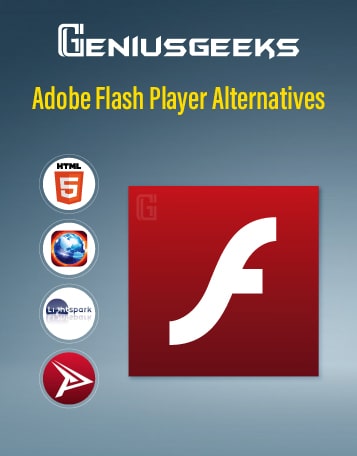 We’ve listed down all the above mentioned software and explained in detail about them so you can know better and select wisely. Choose which flash player suits you and try it for yourself as the Adobe Flash Player has discontinued and we have to move on!

HTML5 is the most predominant and most common alternative to Adobe Flash Player. The announcement by Adobe that Flash support is ending is a straightforward answer as to how long HTML5 will go. Now, HTML which stands for Hypertext Markup Language, in its fifth edition. It is a type of coding language that enables online display of text, images, programmes, tags, and other components.

By distributing content on the web, HTML5 has slowly replaced Flash Player. Adobe Animate CC also provides HTML5 canvas with the ability to publish basic Flash content. The plug-ins that depend on Adobe Flash are going down and are going to stop entirely in 2020 after Adobe officially pulled the Flash plug off. Without a doubt HTML5 is the best Adobe Flash Player alternative.

This is the best replacement for Adobe Flash Player because of its directive and the interface. It is easy to use and if you are switching from Adobe Flash Player to this application. It is worth noting that as good as it is, it does not solve all the issues Adobe version of this app was facing.

Supernova is an extension, like Flash Player, that is readily accessible on the Google Chrome Store and can be enabled on your web browser almost as easily. You will play Shockwave Flash (.swf) games that are optimised for use with Adobe Flash Player. In addition, it also provides a standalone player that can be loaded and run from any web browser on your PC.

Lightspark is an open-source alternative to the Adobe flash player on the list that is written in C/C++ and runs on Linux. You will find Lightspark’s code on Github. This is the reason why Lightspark is another best Adobe Flash Player alternative.

Lightspark has not been changed for a while; that means any of the new Flash-based contents won’t be played. Keep in mind that this is Linux based and hence you are bound to get all the new updates and patches from time to time.

A project was launched at the beginning of 2018 to preserve the internet’s history and the loved games and videos that were thought to be extinct when the Adobe Flash Player was gone. Therefore, with the main intention of protecting and promoting anything on the internet that only supported Flash Player at the time, a non-profit programme was created known as BlueMaxima’s Flashpoint.

Started as a small initiative, Flashpoint is now an international success that gives an indication of the importance and legacy of the internet. Not only does it deliver a single Stable Player for Flashpoint, but 2 separate versions and hence is definitely a prime contender for one of the best Adobe Flash Player alternatives.

There is no doubt all of us are still missing how Adobe Flash Player worked and solved all our issues online, yet, it is what it is. These new replacement options have brought in more features, trends to the usage of flash players and have eradicated the issues which were previously faced by the users while using Adobe Flash Player.

There is no doubt that one of these flash players is going to be your alternative to Adobe Flash Player and hence let us know in the comment which of the following was the one you’re going to choose and why. Stay tuned to know more about the day in and day outs of these software and all the happenings in the technological market.

Niket is a tech geek who loves to try his hands out at latest Apple inventions. He is always willing to learn more of the ins and outs of newest tech gadgets, applications and games.
Articles: 17