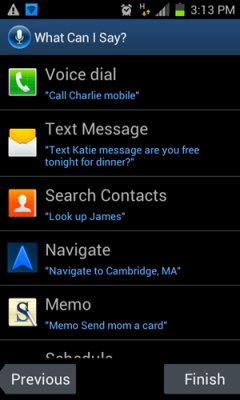 In an unexpected way, Samsung witnessed yet another app slipped through its flagship product, Samsung Galaxy SIII. Samsung elated to have some of the exclusive products like Flipboard and S-Voice, a software assistant of Samsung’s own to compete with Apple’s Siri. There is a whole community that animadvert Samsung of getting too much inspiration from Apple products and offer it to android community with nice wrapper. But what they forget is Samsung offers the best hardware out there at an affordable price.

Samsung’s announcement of Galaxy SII product has received a huge response from the crowd and over 9 millions handsets have already been pre-ordered. During the unveiling Samsung also show-cased spellbinding  S-Voice app, an answer to Apple’s own software assistant, Siri. Samsung is hugely relying on its software front along with eye popping hardware front to break all the sell records. Unfortunately, Samsung is getting a blow after a blow on their software front. First, Flipboard APK was leaked in wild, which was not expected to be available for few months on Google Play. And now, S-Voice APK has also been leaked in the wild ready to be installed on ICS powered android handsets.

XDA developer forum member has yet again managed to spills the bean out. Those who are not aware of S-Voice, it is a Siri clone (better word would ‘Siri like app’) that will be exclusively available to Galaxy S3 owners only. In a nutshell, it is a simple software based assistant which will help you to perform many tasks with just voice commands. Setting up a meeting, enabling an alarm, searching for the hotel, resort, places etc. are some of the functions that S-Voice can do.

S-Voice APK had been extracted from the device and is now being distributed worldwide. Any rooted android device with ICS installed can download S-Voice APK and install it on their device It works flawlessly besides few hiccups. The XDA community and other people are dumbstruck to see its resemblance with Siri starting from little mic button. But we’re not concerned whether it looks similar to Siri or not. All we care is how well it performs its functions.

After downloading extract it to your computer and  transfer it to the device’s internal memory. Now you need to use third-party file manager to install it on your device.