With recent announcement in cloud storage service segment, Google has joined the rivals Apple, Microsoft and Dropbox. For those who are not accustomed with Google drive appellation and features can read our detailed guide on Google drive service. Those who are familiar with Dropbox will not find it hard to guess what Google Drive is and does. Along with the service announcement Google has also announced free 5GB space to all future prospects, which is somewhat uplifted than what fierce rival Dropbox has to offer. However, it is still behind SkyDrive service which comes with 7GB of space (upgradable to 25GB for free).

Google products users will find it extremely helpful since it given an uplift to Google Docs service. Along with slews of new features, search engine giant has also announced dedicated Chrome web store with more plugins to support users.

Google announced immediate availability of Google Drive desktop and mobile client. Users of PC, Mac and Android smartphone can immediately download respective clients on their device. However, as of writing this article Google Drive is not available in all the region and hence PC client was unavailable at http://drive.google.com but Android app can be downloaded from Play store. 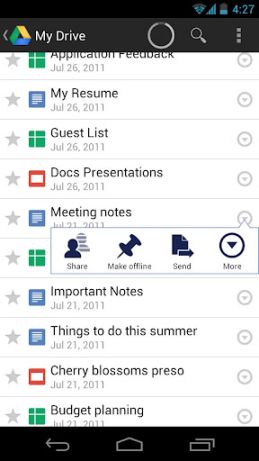 Google Drive for Android has already been downloaded over 30k times from Play store. It is available for Android devices running on Android 2.1 and higher. It is also compatible with major Android Tablets running on Honeycomb or higher.

Have you downloaded Google Drive on your Android device? Do let us know your experience with the app via comment section below.